>we got back home more than a week ago, but it has been intense trying to catch up, so i have not had a chance to use the computer much. leaving here and then returning, i feel alienated, like a stranger in the garden. as i had feared, many things had happened while i was gone. the bees had swarmed (we had two hives when i left; we now have six) lots of flowers had flowered and were in decline when i got back, and the tomato plants were about twice as big, although their fruits are still green. ali had revised the watering system, and i am still trying to learn it, much to his frustration. however, one thing that had not happened, and for this i am very glad, is that the cicadas had not started their chanting when i returned. they have since, but it would have been too depressing if it had happened in my absence. it is hard to explain, but i think perhaps it is connected to our return from new york last summer, after my dad died. i had left in late spring and returned to find the garden in the dead heat of summer.
our trip to sheffield, england was wonderful — lots of talking, something i find that i relish now that we live in the middle of nowhere. it was so lush and green there, i felt like getting down on my hands and knees and eating the grass myself, alongside the roly poly sheep. there was an exciting trip to an alpaca farm(!) has sparked dreams of alpacas on our land. for the moment, though, our hands are full… here is a glimpse of my aunt’s beautiful garden:

and with that, contrast my sun baked garden — bright colors are my only hope! 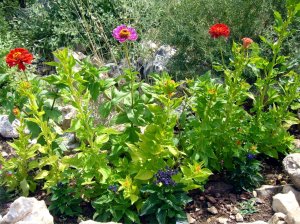 i brought lots of plants back from england, including some asparagus root crowns. they had gotten pretty demoralized on the trip over, but a few brave spears have emerged. now if we can just sit on our hands for two years, we may have months of asparagus in our future every spring. if they can stand the heat, that is.
for it is hot! we are entering deep summer here in ulupinar, but luckily there is a persistent breeze up here. down by the sea, it is soupier, and not as pleasant. come august, though, no amount of breeze will help, i bet…