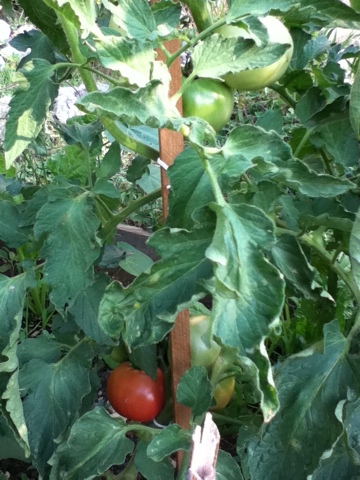 I saw it from afar, as I was watering the bitter melon- a bit of red peeking out from between the leaves of one of the Momotaro tomato plants. We’ve been eating tomatoes for a couple of weeks already, but I’ve been waiting for the Momotaros. It’s a Japanese hybrid that is apparently a popular market variety. I saw it in the Territorial Seeds catalog back in 2009, and somehow ordered them too late to plant them last year. So it was very exciting to be growing them at last. The plants have gotten huge, with enticing clusters of hard green tomatoes. We ate that first tomato for breakfast with a bit of olive oil, and I’m pleased to report that it was very tasty and, as the seed catalog had promised, very sweet. 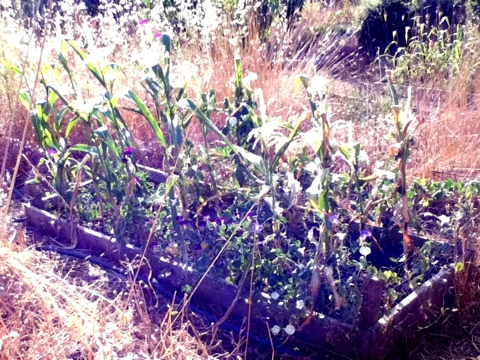 We’ve more or less eaten all the corn on this bed, and for some reason it didn’t grow all that tall. I planted some beans under them, though, so I’ll leave them standing for a while. The nicest thing about this bed is all those morning glories- three different kinds. It is one of the many spontaneous eruptions in the garden that so often outshine plantings that we have carefully thought out.