>how to fertilize is a question that we go over and over in our minds and our garden, and the solution of the day is… manure tea! we have 100 liter metal tank at the top end of the land and a big big pile of manure from our neighbor right by the gate. ali brings the stuff back by the truck load. 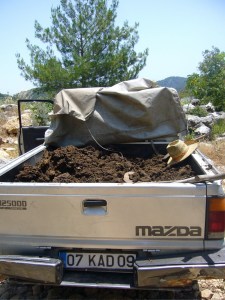 it’s not as smelly as you might imagine, since it is not fresh, and the flies are not particularly interested in it either. anyway, to make manure tea is very simple. we put a sack in the tank and fill it with manure, fill the tank with water and let it steep overnight. the next day, voila! smelly, dark brown liquid manure goodness. we run a hose down from the tank into buckets and use small buckets to water around. we can usually get one terrace done with a tank. it hearkens back to last summer, when we did all our watering by bucket. those were the days.
well, yesterday morning i was was watering the garden (with a hose!) and ali was up by the metal tank, pulling out the spent manure to spread around the garden before we used the tea and he kept on saying ouch and damn it and generally acting like something was bothering him. he didn’t know exactly what it was until the third time and he saw that he was being stung by a baby scorpion! it was small, like a biggish cockroach, so not very poisonous. still, it hurt for a good long while, and it was sobering to imagine what it would have felt like if it had been a bigger one. like the one that i found under my pillow the other day, for example! it turns out that our neighbor had found a baby scorpion in the house a few days previous, so i guess it is baby season for the scorpions. maybe that scorpion under my pillow had been looking to set up a family.
in other news, one of our prize seedlings in the greenhouse, a catha edulis or khat tree, was eaten to a stub by an anonymous marauder. this has left us feeling demoralized. to top it off, yesterday evening ali heard a loud buzzing and thought he had found a hornet’s nest. that would be a real prize, because they are multiplying and attacking our bees very aggressively lately. well, the sound he had heard was one of our hives swarming up in a pine tree, fleeing the hostile environment that their hive had become. so we are down to two hives. this makes me feel positively murderous when i see those hornets. i have a bit of a plan — i will write about it if it works…