A little while back, the amazing Celi at the Kitchen’s Garden wrote this post about what’s what in her garden. And in her typically generous manner, she invited us to show her what we her readers are up to.
It’s not all that grand and I shot these with my iPod because I hadn’t found my camera yet (but I found it today, at a baby’s birthday party, while rummaging in the deepest recesses of my bag for a diaper) but even so, here’s what’s coming up round us. We are on a mountainside, so our garden is on a steep slope that is terraced (not our doing), and each terrace has a (not very poetic) name.

That’s the strawberry patch in the foreground with the pea trellis behind it. (This is the cucurbit terrace because I grew cucumbers and squash here the first year we were here.) As you can see, if you are familiar with the trellis, there’s a lot more going on there now.

I’m especially excited about the purple ones. They’re snow peas. The others are shelling peas, a southern variety called Wando that is apparently on the heat resistant side. 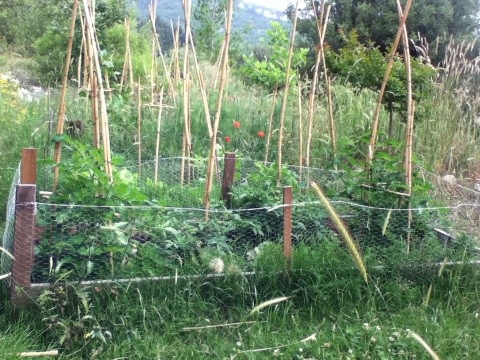 Those are the first tomatoes I planted out, and the early ones are fruiting, though hard as rocks and quite resolutely green. This is what we call the “vegetable bed terrace” because there are seven veg beds on it (only one raised bed) with a lotus pond in the middle. It’s a bit wild and wooly because of all the rain we’ve been having.

This is Baki’s garden. It’s on the keyhole bed terrace, so called because there are three round beds there with another lotus pond in the middle. Right now the keyhole beds are pretty empty because I was letting a few things set seed and I just pulled them up. In Baki’s garden, we planted cherry tomatoes and cucumbers, with some marigolds (for color and bugs) and also something called fur balls. We’re not sure what those are, but Baki liked the sound of them. 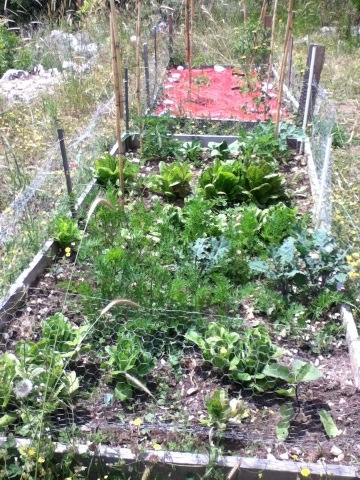 Down at the bottom of the garden on the old water tank terrace there’s a raised bed full of onions and these two: a mixed bag of greens and roots and behind that a tomato bed. That’s a red plastic mulch that I was curious to try. Ali is vehemently opposed, so I waited until he was in Istanbul to lay it down (though I told him I would, so it wasn’t subterfuge). That way, he needn’t feel any sense of complicity. Anyway, the red mulch is supposed to increase tomato yields as well as suppressing weeds and retaining moisture. Worth a try, I thought, in the spirit of inquiry.

That’s one of the artichoke patches (there are three at the moment). Artichokes are one of the few vegetable plants that Ali favors, largely because they are perennials. If you are also interested in perennials, there’s a great book called Perennial Vegetables by Eric Toensmeier that’ll get you all worked up.

This is the first of three corn beds that I planted. This one is Country Gentleman sweet corn and that’s the asparagus gone crazy behind it. On the right side is the Maxmillian sunflower hedge. They are real survivors, those guys. It’s a perennial sunflower that blooms at the end of summer.

Our potatoes are growing on the site of our compost heap from two years ago. It’s a little shady, but they seem happy enough.
And that’s a look at our vegetables! When there’s more going on in the lotus ponds, I’ll take some pictures. At the moment, there are mostly frogs in the ponds now, and this may be why we’ve had a sudden explosion in the snake population in the garden. Ali and I have seen vipers slithering off in the vicinity of the ponds, and Baki encountered a garden snake on the stairs. And so I leave you with this deeply enjoyable poem by Emily Dickenson full of surprising pleasures (“unbraiding” just kills me, it’s so deft). It sums up the shivery thrill of our encounters.

A narrow fellow in the grass
Occasionally rides;
You may have met him,—did you not,
His notice sudden is.

The grass divides as with a comb
A spotted shaft is seen;
And then it closes at your feet
And opens further on.

He likes a boggy acre,
A floor too cool for corn.
Yet when a child, and barefoot,
I more than once, at morn,

Have passed, I thought, a whip-lash
Unbraiding in the sun,–
When, stooping to secure it,
It wrinkled, and was gone.

Several of nature’s people
I know, and they know me;
I feel for them a transport
Of cordiality;

But never met this fellow,
Attended or alone,
Without a tighter breathing,
And zero at the bone.