It has been longer than usual since I last posted, and for all the usual reasons that people don’t write — hectic times, and no wherewithal to bring things to a standstill for long enough to put anything down. I dislike it when the days get away from me, and every day that goes by without writing feels a little heavier than the last. When the boys are asleep, time seems to slow back down though. So instead of turning in early to get those extra hours of sleep (since they never get added on at the waking up end of things) I thought I’d put myself out of my misery and put a few words down about what’s up in the garden.
We are well and truly in the northern hemisphere, but autumn is still not quite a done deal here. Our daily highs are in the 80s/20s and although it has started to rain now and then, we are not in the soaked earth days of winter.
With the temperatures still so high, there are lots of grasshoppers and other hungry characters at large in the garden. All of my winter veg seedlings were getting devoured before they could grow much; even the chicken patrol has its limits (and lately the chickens have been invading the veg beds, too, leading to reinforcements of our chicken wire perimeters around the beds).
Before I go any further, let me point out that I know no self-respecting person would admit to having enough cola bottles to hand to do what I am about to describe. Any plastic bottle will do, of course — water bottles, which even the best of us end up with from time to time, would also work. This is just my way of putting the things to use.
So anyway, Ali pointed out that cloches might help matters. This is how I acted upon this useful bit of advice:
I sow our veg seeds in paper pots on trays that hold 24 pots, so I armed myself with that many bottles, cutting them just below the middle with a bread knife, and grabbed my favorite transplanting hoe. I was going to need short stakes, and it just so happened that there were lots of dried out asphodel stalks about (they grow wild here), so I gathered those.
I dug a hole and placed the stake: 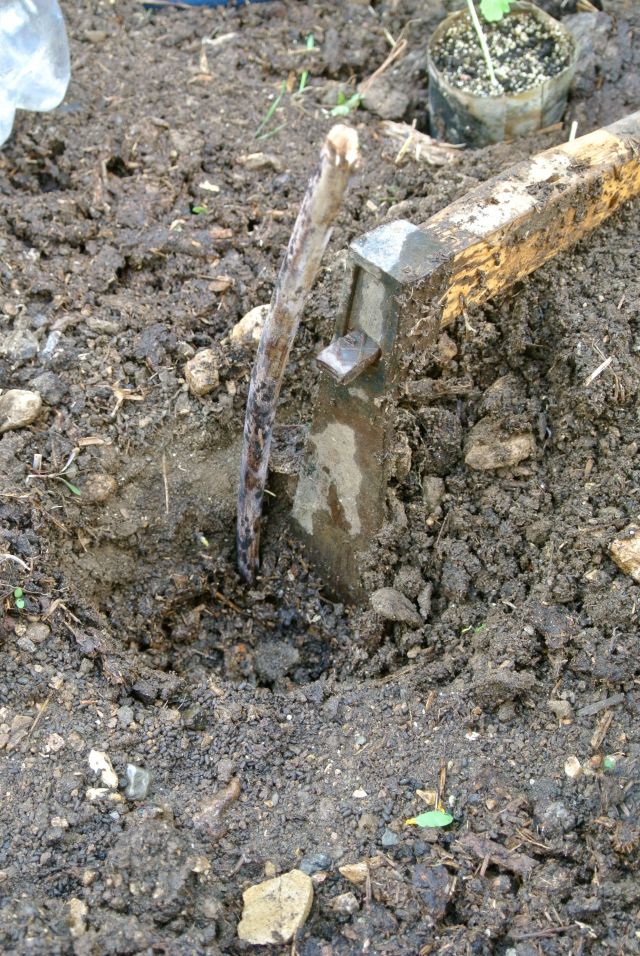 and once I’d gotten the seedling settled in, sat the bottle top onto the stake:

I started using the bottle top cloches about a month ago, and those first seedlings are doing really well. After about ten days under the cloche they got big enough to be liberated and the majority of them are still going strong. Being sheltered just gave them time enough to get big and tough enough to withstand the attacks inevitable in an organic garden. I bet they would be nice little shelters against frost when the time comes.