Dear Uncle Herbie,
This is how I am going to remember you — behind the wheel of your Buick:

I took this picture when we went on that road trip from Portland to LA to see Uncle Wei and Uncle Bun (funny, I had to stop and think of whether Uncle Bun was still alive when we made the trip, but of course he was). It was such a fun trip, just you and me, driving along the Oregon coast, visiting the sea lion cave, seeing the redwoods, going to the aquarium in Monterey, (and let’s not forget the all important Jelly Belly factory) collecting pressed pennies all the way.

Of course, there were years of good times preceding that trip. I won’t be likely to forget that you were the first person to try and teach me how to drive (which can’t have been good for your blood pressure, but never mind — I’ve gotten the hang of it now) and to catch a trout.

When I learned that you’d had a stroke, I began that inevitable process of scrolling back. When was the last time I saw you? When was the last time I talked to you on the phone? When was the last time I was in the house in Portland? And I tried to replay your laugh, and remember jokes we had told each other. When I learned that you had died, I regretted that we wouldn’t be celebrating your 90th birthday together next year like I had hoped, and wished I had seen more of you, called more often, and been an all around better niece. But I’ll be the first to admit that there’s not much to be gained in that train of thought. Really, the best thing to do right now is sit around and eat and talk about you, and that is exactly what the crew in Portland are going to be doing tonight. I heard they’re having Rock Cod and chicken stuffed with sticky rice. Now, that’s what I call getting down to business.
Of course, my biggest regret is that you, like my father, will never meet Kaya, a sweet and gentle boy and the apple of my eye. But I am glad that you and Baki met and got along so well, and you even looked a lot alike before he started to grow some serious hair! 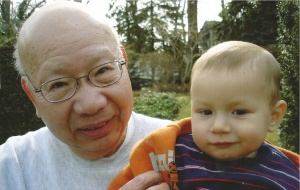 He is going to miss you; we all will. And of course, so will I. We were buddies, you and I.
So long, Kemosabe.
Love,
Gunga Din

10 thoughts on “So long, Kemosabe”