Want to see what’s going on in everyone’s kitchens? Stop over at Fig Jam and Lime Cordial to see Celia’s kitchen and find links to many more.

One of the things that I love about reading people’s In My Kitchen posts is that so much of people’s lives are reflected in what is going on in their kitchens. We hear about a bowl and then where the bowl came from, and what it is used for. So I am using this post to summarize a bit of what has happened over the summer and what we are looking forward to this fall. I haven’t been able to sit in front of the computer much this summer, so I feel like I have a bit of catching up to do!

Starting in August, the month began with… 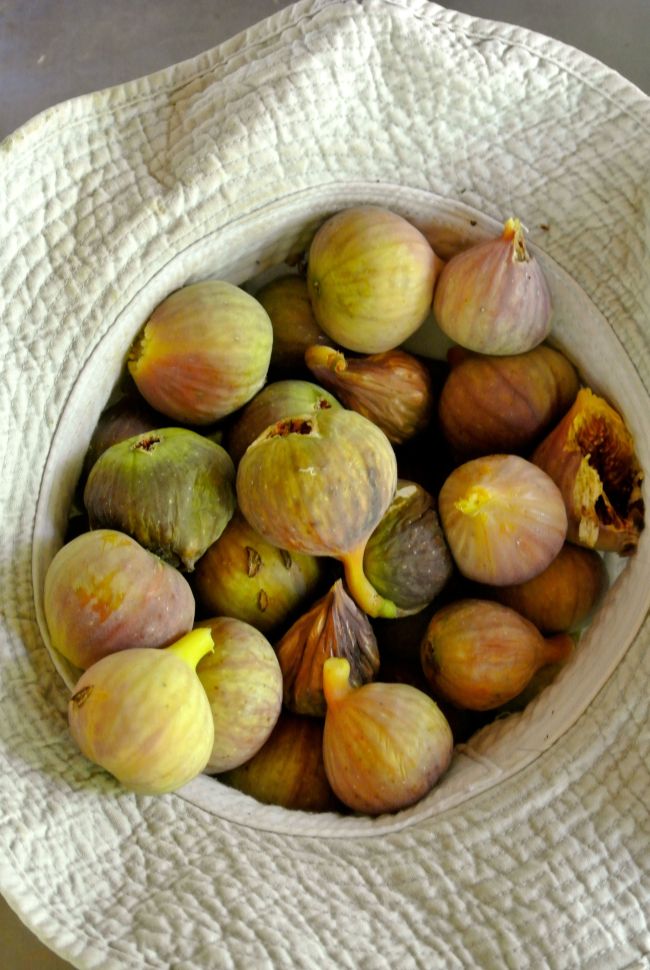 figs! In my kitchen, there were hats full of figs for weeks. My neighbor showed me how she dries them, and I followed suit — she just plucked off the stem, halved the fruit with her hands and turned the halves inside out. Then she lined them up on a tray and put the tray on the roof to dry. It works a treat — we’ll have fig compote this winter. It was one of those little lessons in how things are just as easy or complicated as you make them.

In my kitchen there are Mexican Sour Gherkins.

I photographed them with Kaya’s feet thinking that would show how small they are, but that doesn’t really work unless you know how small his feet are (not that small, actually). I think the grapes in the background might actually be more helpful. This is my first year growing these, and I like them a lot. They have taken over one end of a raised bed and we pick them as we pass by and munch on them on the go. The kids like them, too. They are like sour, grape sized cucumbers. I just read a post about pickling them (which has a very enticing photo), and might try that out since I have some pickles that I just  started in brine. It wouldn’t hurt to throw a few of these fellows in there too, I bet…

In my kitchen there are new refrigerator magnets.

Baki’s much-awaited return home came on August 5, and it was a noisy reunion indeed. Kaya was delighted to see him, and Baki gave him and us big hugs and we all couldn’t stop talking about how much we missed one another. It is certainly a lot noisier with him around, but I wouldn’t have it any other way.

He was pretty busy at day camp, and had cousins to visit on the weekends, but he and my mom did manage to fit in a few museum visits (Baki is really into museums lately). He got me these beautiful magnets at the gift shop of the Metropolitan Museum of Art, where he was most impressed by the Arms and Armory exhibit. What good taste he has!

In my kitchen there are Jordan Almonds.

There almost weren’t any almonds, but my mother-in-law protested. “I told her, it wouldn’t be a wedding without the almonds!” she said as we sat in her living room the day after the weddings. The almonds had been duly ordered, and the wedding was beautiful. Ali’s niece Zulal got married last month and we went up to Istanbul to attend (the boys, my mother and myself, that is — Ali stayed behind to mind the garden).

The wedding was in a beautiful old mansion on the Bosphorous. We were out in the garden, overlooking the water, with a lovely, sometimes very lively breeze keeping things cool. After the wedding ceremony, we all headed up to a large terrace with tables around a dance floor. I kept looking for where Zulal and Serhad were going to sit, but there didn’t seem to be any seats empty for them. That’s because they never sat down! They danced the first dance while we ate appetizers, made the rounds to every table, and then spent the rest of the night dancing — they even cut the cake on the dance floor! Once he had eaten his wedding cake, Baki hit the dance floor too and was a complete party animal. We dragged him home at 1 a.m., just as the after party was getting underway.

The next morning, I had a funny feeling in my face. I rubbed my cheeks and remembered the last time I had felt that way — they day after my own wedding. Ali and I just went to the registry and had a meal out with our families, but I remember that we were grinning like idiots the entire day. The following morning, I woke up with a sore face! I must have had the same silly grin on my face the whole night, watching Ali’s beautiful niece and celebrating with our family. Ten thousand years of happiness, Zulal and Serhad!

In my kitchen there are mooncakes!! 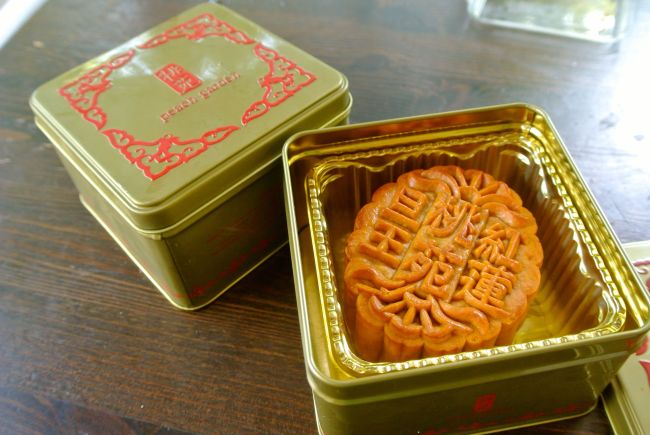 While we were in Istanbul, we met up with an old friend of ours. We got to know Mun Wei while we were living in Nairobi. She used to come over and we would cook all sorts of crazy dim sum nostalgia fare — dan tat, cha siu bao, and all manner of dumplings. Those were some heady kitchen days. She and her family moved to Istanbul after that, funnily enough, and eventually settled in Australia. So it was quite a coincidence when it turned out that she and her daughter Sarah were going to be in Istanbul right when we were.

Moon festival is on September 19 this year, so mark the date. That is the night to get out your teapot and admire the moon’s brightest night of the year. I am not sure why it is so, but on the 15th day of the 9th lunar month, the moon really does shine more brightly than on any other night.

Of course, moon cakes are the appropriate treat to have alongside your tea and they are impossible to come by here in Turkey. I love moon festival, and moon cakes, so I was all set to make my own this year. I even bought mooncake molds on eBay. I may still use them, perhaps to make some snow skin mooncakes, but I am delighted to have these big fatties that Mun Wei brought us all the way from Singapore, where her parents live.

We did the obligatory photo taking at the end of our reunion and Mun Wei sent us her shots. My mother and I were amazed that we actually resemble one another in them! So even though I am not too keen on photos of me, to celebrate finally having grown into my mother’s face, here is a shot of us with our dear friend and food ally.

And finally, in my kitchen there are jujubes.

Anyone who is familiar with Chinese cooking will have come across red dates, but may be (as I was) unfamiliar with the fresh incarnation of these fruits. Ziziphus jujuba, a thorny tree (and they are very nasty thorns when they catch you) bears these smallish apple like fruits. They are crisp when they are green, and sweet with a light perfume. As they get browner, though, their sweetness intensifies and they are like crunchy honey by the time they get to be mottled with deep brown spots. Leave them on the tree and they will go totally brown and eventually shrivel. They retract into the sweet, soft, slightly spongy fruits that we know as Chinese red dates when they are dried. We pretty much gobble them as fast as they ripen, so I have never managed to dry any of my own. One of these days.

And that’s what has been and is in my kitchen these days! Thanks for stopping by.